We’re proud to be part of the Merford family, and here we take a another look at a fanstastic project delivered by Merford Noise Control&nbsp;at Amsterdam Centraal Railway Station in 2018. 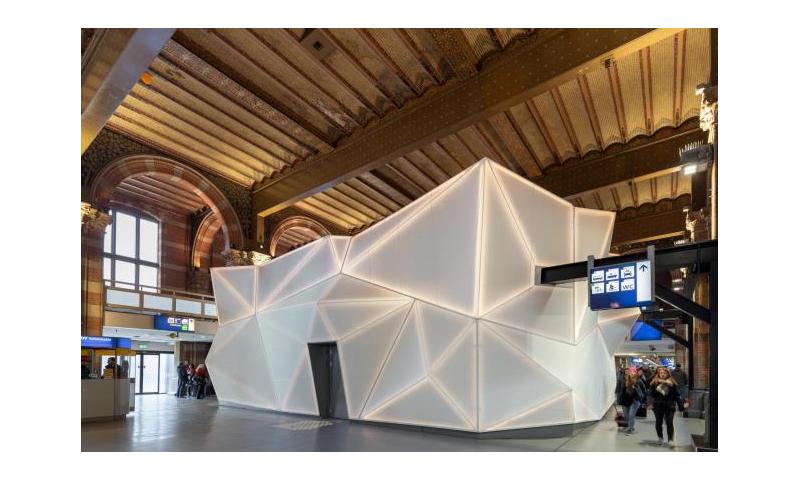 The five year project included the renewal of Stationsplein, the square in front of the station, the building of underground parking garage for 7,000 bicycles, the construction of new tram stops and the expansion of the open harbour front, some of which are still being undertaken.

In the middle of the monumental Cuypers hall, inside the railway station, an ample staircase with escalators now leads the way to the underground metro halls, making it possible to change from train to metro without having to go outside. This ensures a fast and comfortable transfer and also divides the passenger flows at the busy station.

The Cuypers staircase was part of the Benthem Crouwel Architects masterplan from the very beginning: the artwork in the metro hall was designed in such a way that it could accommodate the passage. Now, the staircase is beautifully integrated, combining the materials used for the North/South metro line ceilings and floors with the natural stone used in the Cuypers hall. The staircase emerges in the hall at the exact spot where in the 1950’s an underground route was created for pedestrians, where they could avoid the heavy traffic in front of the station.

The redevelopment works commissioned by the Amsterdam municipality, undertaken by contractor Max Bögl at Amsterdam Centraal Station were only possible that to Merford’s in-house expertise and would have others caused a large amount of disruption to travelling rail passenger dur to the construction works.

The solution Merford designed and installed was a complete sound and dust-resistant enclosure in the middle of the hall of Amsterdam Centraal Station&nbsp;that enabled construction works to be undertaken inside. 'A special project at a unique location', says Merford project leader Ronald van der Nagel.&nbsp;'Complex, but also a great challenge!'. The enclosure design enabled the contractor to complete all construction works, with the station remaining open for business and completely hidden from passengers.

In the search for a specialist in acoustic insulation, Max Bögl ended up at Merford.&nbsp;'We soon noticed that Merford is a serious party.&nbsp;They switch quickly, think along and are very solution-oriented, 'explains Douwe Bijlard, project leader at Max Bögl.&nbsp;'In the implementation, but especially in the preparation.'&nbsp;Douwe refers, among other things, to the requirement of the fire service that the casing must be fire-resistant for at least one hour.&nbsp;"We presented that requirement to them and Merford came up with a robust solution."&nbsp;The soundproof SKS panels were combined with Promatec cement-bonded panels to the design and substantiated the fire resistance in an official report for the fire service.&nbsp;Ultimately, this solution was approved by authorities.

Fire resistance was one of the challenges, Ronald assures us: "There were a few complex factors."&nbsp;The load capacity of the floor, for example.&nbsp;This is limited in the monumental station.&nbsp;The steel construction to which the soundproof panels are attached therefore rests on support points on the sides of the hall.&nbsp;'Specialist work', Ronald knows.&nbsp;'We therefore worked with subcontractors for those calculations, the construction of the frame and the overhead crane.'&nbsp;In the preparation, Merford also thought about the shape of the housing.&nbsp;'In an emergency, everyone must be able to leave the station concourse quickly without running into sharp points,' says Ronald.&nbsp;"That's why the casing has chamfered corners."&nbsp;The biggest challenges in the implementation were space and time.&nbsp;'We are used to working in a tight space,&nbsp;but this is really a stamp.&nbsp;For example, there was no space to store equipment.&nbsp;That requires good coordination and a lot of flexibility from the builders.

Hundreds of thousands of travellers come and go every day at Amsterdam Centraal Station.&nbsp;In order to hinder them as little as possible, the housing was only allowed to be built between 9:00 pm and 7:00 am.&nbsp;'And the number of transports for the supply and removal was also limited.&nbsp;So logistics was quite a puzzle ', says Ronald.&nbsp;'The nights were long, but we all got the job done in two weeks.&nbsp;It really is a calling card. '&nbsp;Partly due to the gigantic light object (designed by Studio nvb) that hides the housing from view, it has become a striking building.&nbsp;But more importantly, the 'box' does what it was built for: 'We have started our work within the housing and we do not hear the messages from the speaker there', Douwe experiences.&nbsp;'And they don't hear us outside.&nbsp;'The contractor is therefore very satisfied with the result.&nbsp;And he now knows that Merford does more than just sound insulation.&nbsp;'We also submitted a tender for the doors, shutters and penetrations of this project.&nbsp;With such a next challenge, I will certainly be able to find Merford again!